skip to main | skip to sidebar

So, what does Melissa McCarthy have there below her Photoshaved chin and under her coat: an extra limb? Explosives strapped to her chest? A gaping wound? A nest of ducklings she's keeping warm? A sparkly disco ball?

We'll never know, because letting the fat human body take up the space it actually takes up makes people really nervous. In life, and in pictures. Especially, somehow, in pictures.

Most women who magazines choose to put on their covers are close enough to the very narrow range of what's acceptable that magazines can make it work. Everyone gets tweaked -- shaved, padded, lightened, smoothed, sharpened -- until they are the right shape and color and age. Vaguely. But (I am speaking basically about size here) the choice of subject to begin with is very narrow indeed. It excludes extremely thin bodies too, but far more average and fat ones. And the sample is way beyond narrow -- it's a tiny thin line in the population. The debate people engage in about the differences in what they see on magazine covers is a joke. Like prisoners squabbling over minute differences in their daily beige porridge.

Fat bodies, though -- bodies that that lie far, far out on the bell curve past what is considered okay -- bodies that cannot pass: how to handle? They're too big to cut down to fit the usual space. 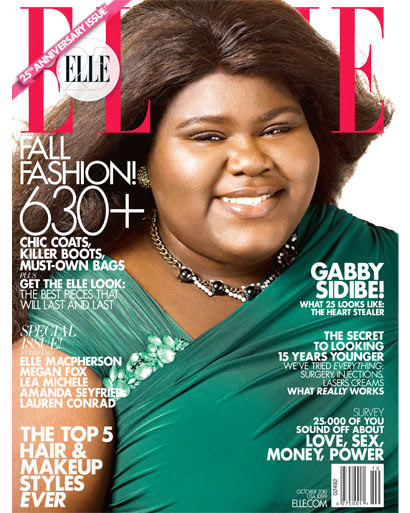 Never showing the whole product, for lack of a better term (although on some level that is what we are talking about, when we're talking about what drives this publicity machine), is being challenged more, though. Melissa McCarthy is officially a major box office star, in a way that still charms me, as it almost seemed to happen despite ourselves and our rules about size.

What I'm starting to see more and more is just: nervousness. The kind of nervousness that leads to hilariously unprofessional and low-quality images such as this: 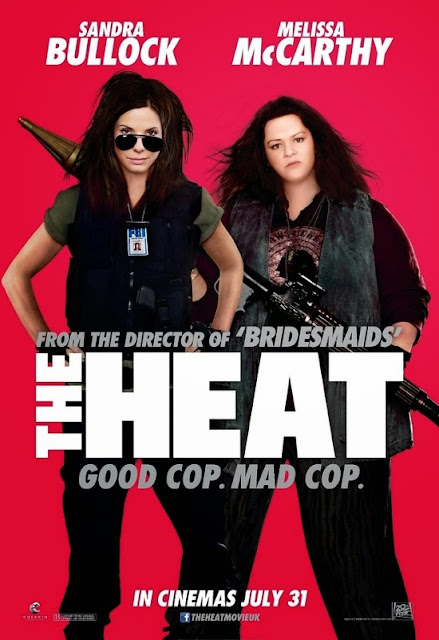 This is a poster for a mainstream, big-budget, high-grossing film, made by a studio with an army of graphics staff, and McCarthy is a head on a stick! This the best they could do!

They don't know what to do. They're flailing. With challenges on all sides, the power of a extremely codified beauty ideal is still so strong that the purveyors of this image give us something a graphic design 101 professor would mark an F.

That is: at this point the fact of the thinificiation of McCarthy's face/body (please Jebus, don't let her go sleeveless!) is less interesting to me, in part because it's been going on forever, than the flailing and missteps. Somehow the poster for The Heat created more amusement in me than horror -- it's just so bad. Unlike some people I would not argue that the thin beauty ideal is in its death throes, but it is facing new tests. McCarthy bundled up in  her winter coat on Elle shows how amateurish the media is about this -- how much more experience they need in showing people of size. And how clear the path isn't, right now.

Oh, so -- to the media: just do it. Show fat bodies! Let them be. Let us see what Melissa McCarthy is wearing. It will be okay. Really. Fluff the ever-living hell out of the pic -- make it as glamorous as you want. But it's okay to show her. Fashion is not antithetical to size. It does not take away from the former to let the latter be seen.

I have been writing a blog piece called "How to Fix Everything" for about five years now. Isn't that helpful? It isn't done yet, but when it is, it is going to fix everything. Totally. I swear.

In my list of things to do to break the stalemate between size acceptance and whole generations of people raised to believe that fat is the same thing as disgusting ill-health and all the leeway you need to justify your hate (hello Rex Reed), among the top two things at this point -- and maybe even the biggest thing I think we can do --  is provide and seek out more imagery of fat people in our daily media consumption. Much much more.

We need to see fat bodies - average bodies -- all the time. ALL THE TIME. Doing all the things that they do. We don't even know how constantly they are curated out of our sight. Fat bodies are such a departure from an extremely well-established and constantly defended and reiterated visual norm that that it's the first thing people see in an image. Many can't see past it at all. We need to start taking images of people of size for granted.

What we need are images of fat bodies without apology. That coat on McCarthy is an apology -- and a very awkward one, at that. Somebody's nervous as hell.
Posted by Elizabeth M. Tamny at 2:08 PM

My name is Elizabeth Tamny. GenX-er involved in size acceptance in diff ways since c. 10 B.I. [Before Internet].
This blog is about issues of size as and when I see and am interested in them, which can mean size acceptance, media, clothing, language, art, movies . . . whatevs. Good, bad, infuriating, beautiful. A scrapbook.

My other blog is here. Note: postings earlier than 2/6/10 are from that blog.

Posts picked up other places:

Other published writings on size

"Notes from the Fatosphere" via Fat O'Sphere in Google Reader